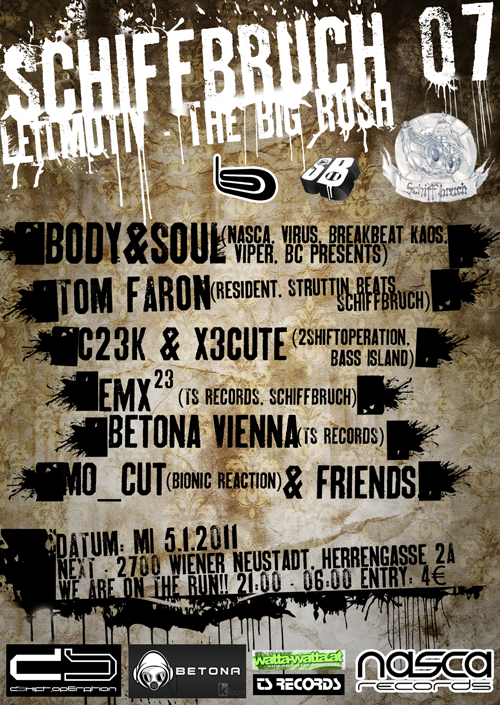 The D&B duo Body & Soul have been dedicated to the dance floor-smashing beats their audience loves them for since their introduction into the scene many years ago. For Body & Soul though the ability to keep crossing musical (and mental) borders, experimenting with different musical genres and throwing in new sounds to create something just a little different from your usual drum and bass anthem is essential. The outfit has become known for their versatile and unprecedented sounds that wow ravers all over the globe and attract new audiences everywhere they go.

After starting off their career at the infamous Bad Company Presents label, the duo branched out
into different side projects and various musical fields in order to further refine their production prowess. Rob and Mike finally teamed up again in 2008 and launched their own imprint – Nasca Records – focusing solely on drum and bass again. The immediate results of their reunion were a number of high profile productions and remixes on Breakbeat Kaos, Viper and the legendary Virus Recordings.

Body & Soul recently released ‘The Reward’, a collaboration with acclaimed production partnership Camo & Krooked. Being the opening 12” on the highly anticipated Viper Recordings LP ‘Acts Of Mad Men’, ‘The Reward’ held top positions in all relevant sales and download charts for several consecutive weeks. Quite an achievement.
This huge success was then followed by another massive 12“ on the infamous Virus Recordings label that proved these guys weren’t just another flash in the pan but were in fact a production force to be reckoned with. A plethora of spanking new tracks followed including ‘Spider and ‘Pure’ on their own Nasca imprint and now a slew of new music is lined up for 2010 that’s sure to delight fans the world over.

Being a major part of the Austrian scene the guys have now started to enjoy a successful DJing career already having travelled the globe taking their brash, ball-breaking sound with them that’s guaranteed to hurt any party. Highlight gigs for the guys so far have included the sets at the Miami Winter Music Conference and at what is fast becoming one of Europe’s most highly regarded events, the Urban Art Forms festival. So be sure to reach a Body & Soul performance soon but be warned these guys take no prisoners!