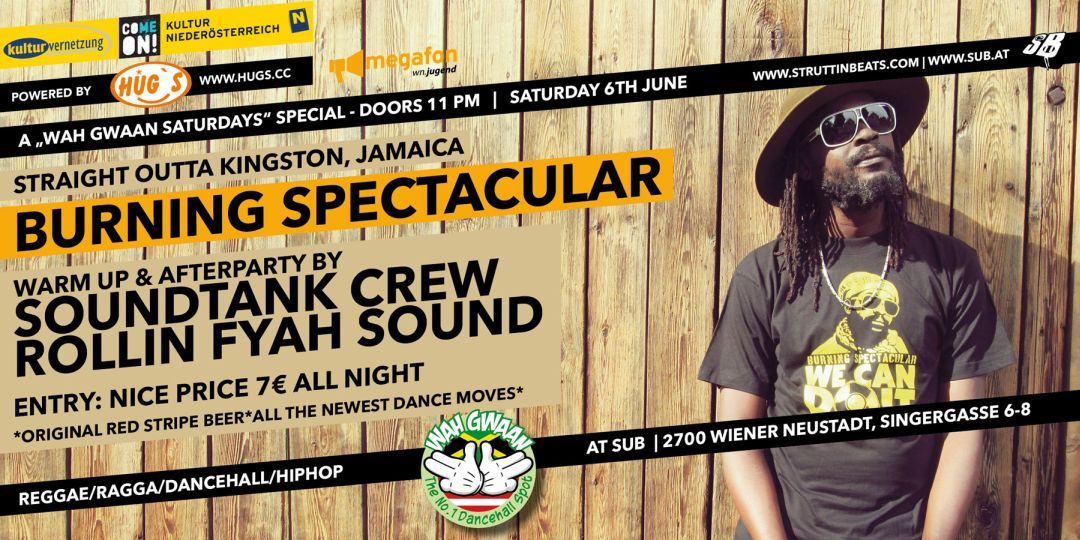 LIVE ON STAGE FROM KINGSTON JAMAICA

Like so many of Jamaican Hit-Makers, Spectacular is a product of the ghetto (born January 26th, 1976 in Kingston, Jamaica). He hails from the Kencot area of Kingston and was educated at the Maxfield Park Primary- and Norman Manley High-School. It was from the street corner that he graduated to start hanging out at the Penthouse recording facility, after school. In 1993 he made his first major stage performance after he had passed an audition for the Yard and Broad promoted, StarWave 93, at Fort Clarence/ Jamaica. In 1996 his first recording, “I Love This Girl”, on the Chop Chop Label, was released. Right after this first record, Spectacular was burning more Fire on the Jamaican airwaves with Hit-singles like “Melody In Your Voice” for Buju Bantons Gargamel Label and “Push On Though”, “Who Hail The Man” and “Love & Joy” produced by Veteran Engineer “Soljie” Hamilton and Dean Frazier. Within the years Spectacular worked with different european Producers like Ganglords from Switzerland and Pionear from Germaican Records (Voice of the People on Dr Darling Riddim) in Germany to built a strong link with the european reggae market. In 2004 he toured in Austria and Germany together with Lutan Fyah and later in the year in France and Spain with Ire Ites Sound.

While Spectacular was on tour he voiced for several producers in Europe to build enough tunes for his first Album. This succesfull tour created a strong name for the artist in the european reggae-scene and finally leads Spectacular to his first Album called “Find Yourself”. Two other albums are on the way…one with US label named I n I Foundation and the other on Irie Ites Records. The first single he had on Irie Ites Records, Rasta on Zion Riddim, got great feedbacks from all over. Few months later, the world discovered his heavy hits Chant and Highgrade featuring Turbulence on Rocking Time Riddim and bussed him up in the charts worlwide !!! On Irie Ites latest release, Borderline Riddim, Spectacular has another great tune called Solution available now on 7. Listen and download Spectaculars tunes with the mixes on the left. (Highgrade Mix & Spectacular on Irie Ites). You still can get some of Spectaculars singles on labels like Minor7Flat5, Germaican Records and also his great combinations with Sizzla: All praise belongs to Jah and Jah Cure: Chant Rastaman.

ABOUT SOUNDTANK CREW
“Forward Ever, Backward Never – the original Badman Sound from Countryside”
The reggae soundsystem SOUNDTANK CREW was founded in late 2007 by STRUTTINBEATS-Founder MUVA and SAN CLEMENTE with the mission to bring nice vibes and caribbean flavor to the lower austrian massive. A monthly night in Wiener Neustadt’s biggest club was born – “WILD OUT” mashin up the place, quickly becoming the regular reggae club to attend. In 2008, third member CHIQUITAMAN was added to the crew and the first old school soundsystem was bought. As of 2012, the orginal SOUNDTANK continues as a two man show, consisting of MUVA and CHIQUITAMAN. The two soundmen understand their business: from early roots and dub, to classic 80ties/90ties dancehall to the newest shots of the reggae industry – these guys have the tunes and understand how to rise the temperature throughout the night inna di dance. Love for the detail is also something the guest will always remember when attending a SOUNDTANK dance: the PA, the flyer-design, the decoration – handsorted and chosen wisely. After several years of partying hard and nearly 40 gigs, 2013 brings new goals: WILD OUT gets a new home, in one of Austria’s newest and most modern club: the SUB. The Crew can look back to Gigs with the likes of Turbulence, Gappy Ranks, Perfect Giddimani, Mikeylous, Baba Sound, Soulforce, Glockwork Posse and Sting Like A Bee, just to name a few. The guys went also into production: 2013 sees their first riddim release, a relick of the classic “Rockfort Rock”. Their first trip to Jamaica for 4 weeks brought a lot of new links and impressions, which will be altered in many different ways in the future. “WILD OUT” transforms into a real jamaican party – named “WAH GWAAN” from now on, at the SUB Club Wiener Neustadt. The next riddims are also in the making – so watch fi dis!

no images were found